What Are We Doing

In my recent escapades of testing various workflow engines I eventually found and grew fond of Argo. Argo Workflows is an open source container-native workflow engine for orchestrating parallel jobs on Kubernetes. Argo Workflows is implemented as a Kubernetes CRD. What does this mean? Basically you can define jobs via a yaml file and have it execute docker containers. It is more common than not for Argo to be able to run privileged containers and this is precisely what we intend to exploit.

One of Argo’s features is the ability to run a privileged container just as you might when using Docker outside of Kubernetes or Argo. When using this --privileged flag containers have root privileges on the host machine, containers have full access to all devices, and not under restrictions from AppArmor, seccomp, or other security features of some Linux distributions. In addition to all that the usage of the --privileged flag introduces the potential for a container escape allowing us to run arbitrary code on the host machine allowing an attacker to take over a target machine.

For the purposes of this post I have setup the following:

For the purposes of this example imagine target is exposing Argo on the internet on it’s public IP.

Argo Container to Root - How?

So now we know what our setup looks like and what Argo is mainly used for. But what about the exploit? How do we get the code that runs inside of the container to execute on the host? Well Trail of Bits did an amazing post on this exact technique (in fact it’s where I learned it). Some of the information below is taken from there for easy reading.

Requirements to use this technique

According to Trail of Bits, in fact, --privileged provides far more permissions than needed to escape a docker container via this method. In reality, the “only” requirements are:

Further, Docker starts containers with the docker-default AppArmor policy by default, which prevents the use of the mount syscall even when the container is run with SYS_ADMIN. If you want to know more, please read the full post at Trail of Bits

Listening On Our Server

Feel free to replace 8080 with a port of your choosing to listen on.

Put It Into Argo

Now I will assume you have access target:8443. This is the default port for Argo, although it’s commonly served over :80 and :443 in the wild.

After you navigate to Argo’s dashboard, click “Submit New Template” 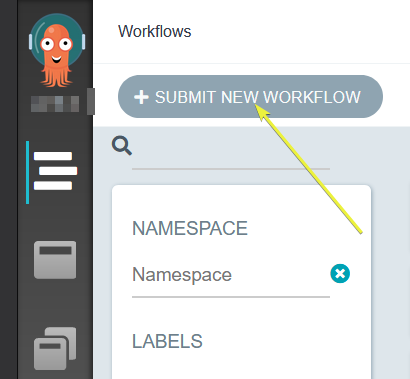 Paste in the following and click Submit. Remember to replace YOUR_SERVER_IP and YOUR_SERVER_PORT with your values.

You should see your container run for a second and then complete successfully.

Now we check out server. You should see a connection.